By Catherine A. Cardno, Ph.D. 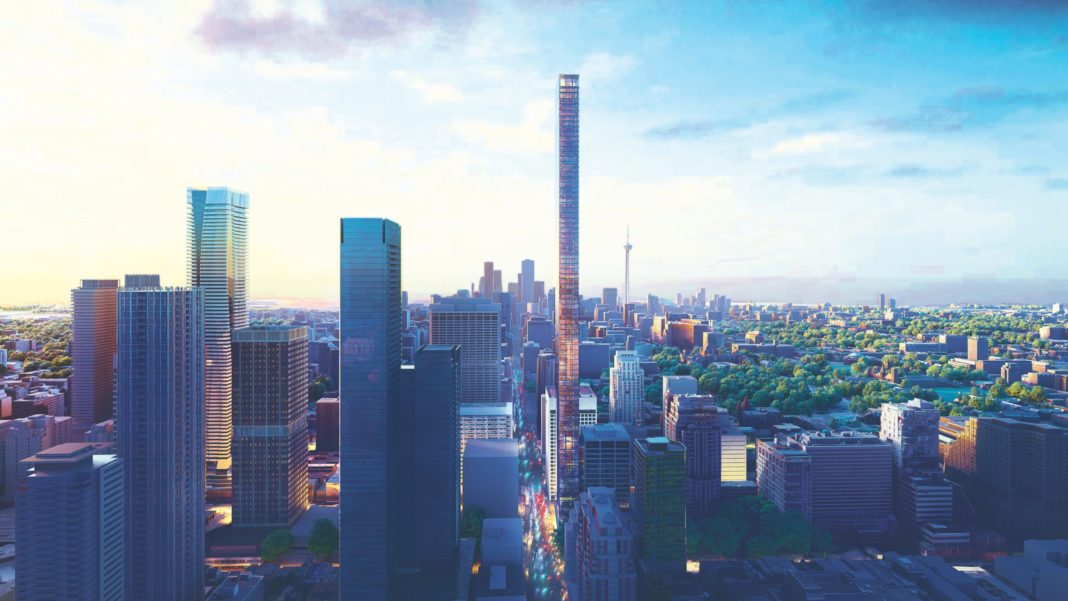 An 87-story skinny skyscraper, designed by Swiss architecture firm Herzog & de Meuron and Canadian architecture firm Quadrangle, is in the planning stage in Toronto. The site, at 1200 Bay St., is at the heart of a new cluster of buildings within the city and along a major east-west axis that delineates the northern edge of downtown. The area also hosts one of Toronto’s best-known shopping areas, according to the designers.

The building will have a north-south orientation with a 3:1 footprint. A linear core at the western facade has been proposed to maximize the usable floor plate area, according to the designers. This core would also provide privacy for any adjacent developments on the western side of the site.

The first 16 floors of the tower will have retail and office space as well as space for technical functions. There will be a triple-height ground floor lobby for the building’s condominiums, and a level with private amenities above the bottom floors will serve the 332 condominiums spread over 64 floors above that. To maximize access to the panoramic views, its upper three floors will house rentable spaces, a restaurant, and a sky lounge.

Floor-to-ceiling operable windows will provide natural ventilation to the condominiums, and residents will be able to control external shutters to regulate daylight and heat load in their units.

The building’s facade will be a combination of interior glazing, exterior timber roller shades, and an outer layer of transparent, open-jointed glass. The goal is to create a building that will be transparent and expressive, revealing the scale of its interior activity, yet opaque and reflective, emphasizing its dramatic proportions, according to the designers.

The project is being led by real estate investor Kroonenberg Groep and real estate developer ProWinko.

This article first appeared in the October 2020 issue of Civil Engineering.

Built in 1903, the Aronson Building survived the 1906 San Francisco earthquake and fires. It’s been seismically strengthened and tied to a new luxury high-rise.
Read more
Projects

A paper in the "Journal of Structural Engineering" studies the performance of cross-laminated timber dowel-type connections.
Read more
History and Preservation