These Are the Best Places to Be a Civil Engineer 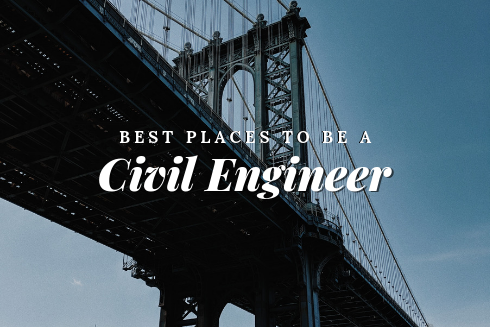 Skyscrapers, airports, bridges – you name it, civil engineers build it.

The nation needs more civil engineers to lend their ingenuity and bring growing cities to life.

The Bureau of Labor Statistics reports that the civil engineering field is projected to grow 11 percent from 2016 to 2026, faster than the average for most occupations.

Whether you’re a new civil engineer or simply looking for change, finding the right city is important. ASCE’s 2018 Civil Engineering Salary Report can help – at least when it comes to the financial aspect of your career decisions. To determine the best places for civil engineers, ASCE News looked at the data gathered from 6,385 Society members.

Here are the top five cities for civil engineers, ranked according to mean salary, as found in the 2018 ASCE Salary Report.

New York City is known for many things – especially its renowned civil engineering feats. A vast network of intertwined infrastructure serves more than eight million residents and millions of visitors each day. Home to the nation’s largest subway system and tallest building, the city continues to take the lead in robust infrastructure plans like the redevelopment of the World Trade Center.

“New York is the best place for an engineer because you can see how what you design and build has an immediate impact on millions of people.”

From monuments to memorials, America’s front yard boasts awe-inspiring landmarks. In 2017 alone, over 22 million visitors spent time in the District. Washington, DC’s bridges carry thousands of commuters each day and offer the best views of the nation’s history. To keep up with the growing landscape, the city has begun incorporating new infrastructure projects like The Wharf and Capitol Crossing.

“The DC region is an exciting place to work because we get to design projects that create livable communities with diverse transportation options.”

With over eight percent of its total land acreage devoted to green and open spaces, Chicago is a city in a garden. Nearly three million people inhabit the multicultural city, which thrives on eclectic infrastructure such as Millennium Park, bike-friendly transportation, and the nation’s second-largest rapid transit system. The city holds ambitious goals for the future, launching a series of billion-dollar green projects for improved infrastructure.

“Infrastructure first put the City of Chicago on the map. There’s a sense of excitement to transform our city’s great past into an even more promising future through investment in our infrastructure.”

The Seattle cityscape captures the essence of the Pacific Northwest, with the Space Needle standing tall in front of Mount Rainier’s backdrop. The seaport city is surrounded by natural wonders and a world-class urban center. Land or sea, Seattle’s bustling population can travel by the city’s bike network or by water taxi. Pedestrian-friendly infrastructure programs continue as the metropolis has secured funding for the Lynwood Link light-rail extension project.

“Being a civil engineer in Seattle means that I am surrounded and supported by people who also want to use their career to improve the world through innovative and sustainable solutions.”

Denver still retains its Old West legacy, so it only makes sense that the city’s first permanent structure was a saloon. The Mile High City is known for having one of the most walkable downtowns in the nation, featuring three stadiums, a performing arts center, and three colleges – all within a mile radius. The city is focused on the road ahead as they plan for growth with a multimodal transit system, transit-oriented development, and urban redevelopment.

“Denver is a great place to be a civil engineer because of the many different opportunities that range from solving complex infrastructure problems to developing the next innovation for digital and connected cities.”

Find Out How Much You’re Worth

It pays to be a civil engineer. But just how much? Are you getting...
Read more
Business