Alexa Ducioame was one of only two women in most of her civil engineering classes in college.

She’s working now to make sure that the women of future generations don’t find themselves in the same position.

“We have an informal women engineers group here. I think we all realize it’s important,” said Ducioame, a project engineer for Moore Engineering, Inc. in West Fargo, ND. 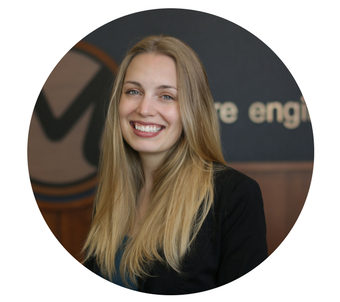 “We want to see more women and more diversity in engineering as we get older. It hasn’t changed much for years. When I talk to women who are 20 years older than I am, the number of women in their classes was about the same as what I had. I’m not sure why the numbers aren’t increasing, but we want to try to change that. I think that’s a common goal among everyone involved in our group.”

Ducioame channels her volunteering passion into a focus on K-12 outreach, and, for her achievements, ASCE has recognized her as a 2018 New Face of Civil Engineering.

Ironically, the gender divide in civil engineering works in Ducioame’s favor when it comes to getting recruited for outreach events.

“People in the community recognize that there is a gap, so they’re looking for women to represent the industry, and there’s not that many of us to choose from,” Ducioame said. “That opens doors and helps you meet different people. Plus, it provides more opportunities to work with the kids.”

Ducioame has an instinct for trailblazing. As she participated in different outreach events, she started noticing a few things. One, there weren’t many – if any – programs addressing a lack of racial diversity in the profession. And two, she found that when she was invited to work with school groups and kids, she was always paired up with the girls.

“I never taught the boys,” Ducioame said. “And I thought, ‘They need to learn that gender stereotypes aren’t true, too, don’t they?’”

So, she worked to start a new outreach event, called BrainSTEM, at North Dakota State University in Fargo. The program brings together seventh-grade students, boys and girls, for a day of activities and presentations led by people from underrepresented groups working in STEM occupations.

Ducioame brought a similar “make your own solution” approach to the release of Dream Big, ASCE’s giant-screen engineering film. Ducioame and ASCE ND loved the film and wanted to make sure children in their state got a chance to experience it. Only problem? North Dakota does not have any IMAX theaters.

Most people probably would shrug their shoulders at this point, disappointed but content to simply move on. Not Ducioame.

She worked to secure a Blu-ray copy of the film for screenings in five cities around the state, ultimately bringing Dream Big to more than 2,000 North Dakota students who would not have otherwise been able to see it.

Ducioame is serving the students of North Dakota as the civil engineering role model she didn’t have. “It was fun to see their reactions afterward,” she said. “They were so excited.”

Early influences shaped Ducioame’s eventual career decisions. When she was just 7 years old, Ducioame experienced a devastating flood that forced her family to evacuate their Grand Forks, ND, home. It left an impression on her. As a seventh grader, a math-obsessed Ducioame took note of a poster in her middle school that connected the dots between math and a career in engineering.

Years and many choices later, she’s a water resources engineer at Moore, working to solve flood control challenges like those in Ada, MN – a town that was still rebuilding 15 years after the same 1997 flood that affected her home.

“We built three different levees in Ada and went through the FEMA process to certify them,” Ducioame said. “Some of those people were paying thousands of dollars a year in flood insurance. The impact of effective flood control is physical, emotional and financial, which makes it really satisfying as an engineer.”

Ducioame credits Moore Engineering with giving her the flexibility to pursue her other passion: inspiring children.

Every year, the company takes part in Introduce a Girl to Engineering (Girl Day), an Engineers Week event. Moore hosts 50 girls from around the area, and they get to work on mini-levees and other real-life design projects with Ducioame and other professional engineers.

“They actually get to do what we do,” Ducioame said. “I think the students appreciate that we trust them to build something and design it just like we would. It’s a lot of fun and so rewarding. My dream is that these activities will inspire kids to pursue STEM careers. And then when they get to college, their civil engineering classes will be full of diversity, where the common bond is not gender or race, but a love for solving problems through engineering.”