New Face Honoree Reps L.A. in Everything He Does

For some people, an address represents merely where they live.

Purasinghe is Los Angeles to his core. 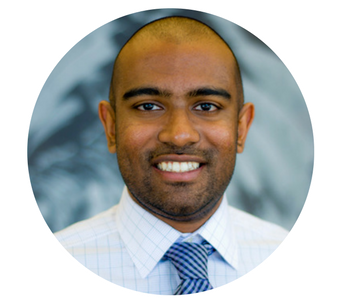 “I was born and raised in L.A., so I have a special connection with the city. I love this city,” he said.

“L.A. is an incredibly huge melting pot of people, cultures, and ideas. There’s something in L.A. for everybody. You can snowboard and go surfing in the same day. You can’t really be bored in L.A.

“And I feel like the people in L.A., it’s like a family. There’s definitely a bond between people in Los Angeles.”

Not even a decade into his career, Purasinghe has already done a lot for his L.A. family – he’s a civil engineering associate for the city’s Department of Water and Power and president of the ASCE L.A. Younger Member Forum – and for that work, ASCE has honored him as a 2018 New Face of Civil Engineering.

Purasinghe’s civil engineering destiny was assured early on. His father is a professor of civil engineering at California State University, Los Angeles. So it was not unusual to find engineering textbooks strewn across the dining room table at home or find math equations scribbled on paper around the house.

Then there were the Legos.

“I think half of my bedroom was a Lego theme park that I’d built,” Purasinghe laughed. “I didn’t realize at the time that it was more or less engineering stuff that I was doing.”

So it was a natural progression into the profession. But it was his love for his hometown that led him back to Los Angeles after four years of college up north at UC Davis. And it was an internship with the city that convinced him that he wanted to eschew his Ph.D. pursuits in favor of public-sector work.

“As an intern I was going to neighborhood council meetings, I was working with City Council, I was writing city ordinances,” Purasinghe said. “And I thought, ‘I really like doing this stuff. Research is cool, but I really like working with the public.’ That internship really turned me toward working for a public agency.”

Purasinghe is now in his fourth year with the nation’s largest public utility. He works on the planning, design, and construction of the capital improvement projects for the L.A. water system. In essence, that means making sure the 4 million people who live in his beloved city have reliable, high-quality water.

With the region’s seismic concerns, recent historic droughts, and reliance on external sources of water, it’s a tremendously challenging job, but Purasinghe loves it.

Purasinghe gives plenty back to the community outside of work as well.

He started with the ASCE YMF in 2014, turning a P.E. exam review course into a fundraising goldmine for the group. He now serves as president and particularly enjoys the outreach events.

He’s helped organize an annual Engineers Week event in February that introduces and motivates high school students to consider a career in the STEM field.

“I absolutely love it. I’ve met so many really cool engineers, really cool people through ASCE,” Purasinghe said. “I really like the K-12 outreach aspect, because we’re inspiring the next generation of engineers. I get a lot of joy out of that, seeing the kids’ faces when they realize the amazing things they can do with engineering.”

Even when Purasinghe is overseas, he’s repping his hometown. During a recent visit to Tokyo, he was taking a sushi class, and the people in the room were going around introducing themselves.

“I’m able to say, ‘I’m a civil engineer for the city of Los Angeles,’” Purasinghe said.

“And I never have to say anything else. It speaks volumes on its own. For me that means a lot.”

ASCE will honor Purasinghe and all 10 New Faces of Civil Engineering – Professional at the 2018 OPAL Gala, March 15 in Arlington, Virginia. Read more about the rest of the New Faces class.