ASCE members from all 50 states and Puerto Rico brought their message – and the #InfrastructureNow hashtag – to over 310 Members of Congress Wednesday afternoon, advocating for a variety of infrastructure solutions at the annual Legislative Fly-In.

“Raising the gas tax is a simple way to come up with money for infrastructure repairs,” said Bob Cagle, ASCE Region 4 director. “It gets money right now. It helps across the board with things that need to be done.” 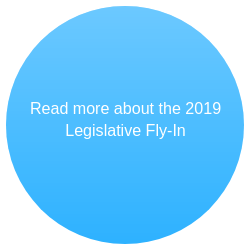 Cagle met with Rep. David Rouzer, his representative from the 7th District of North Carolina, more influential than most as he serves on the House Transportation and Infrastructure Committee.

While ASCE has long advocated for raising the gas tax, there was a feeling of renewed optimism and enthusiasm at this year’s Fly-In following recent advocacy wins at the state level.

Alabama lawmakers approved a 10-cent-a-gallon increase March 12 – nearly four years after ASCE’s Report Card for Alabama’s Infrastructure graded the state at a C-, and just a year after the Alabama Section earned the Society’s Civil Engineering Advocate Team of the Year award.

“Getting the gas tax passed is just awesome,” said Shelia Montgomery Mills, a key leader in that Alabama effort during the last decade. “I think us talking about it helped the politicians and the legislators understand there was an issue. It was tangible. They had evidence with our State Infrastructure Report Card, and they basically went out there and said this is what we’re going to get behind.

“It shows that you can make a difference and I feel like we did.”

Music to the ears of Chris Corbitt, an ASCE member from North Little Rock, AR, attending the Fly-In in Washington, DC, this week.

“I don’t see how legislators can be against infrastructure,” Corbitt said. “It’s a primary function of government to build water treatment plants, bridges, roads. And that spending creates jobs in communities.

ASCE brought that conversation to Congress Wednesday. The hope is that the talks will will lead to results, quite literally, down the road.

“If you get the roads cleared up, farmers can get their produce to market. The truckers can move on quicker. It reduces the cost to the public. It helps everybody,” Cagle said.

“From what we’ve heard in our meetings, it should be something that’s a bipartisan effort because everybody rides the roads. I think there’s hope.”