ASCE's News and Information Hub
The Source Civil Engineering Magazine How Does the 2020 Economic Downturn Compare with Others Past?
Business

How Does the 2020 Economic Downturn Compare with Others Past? 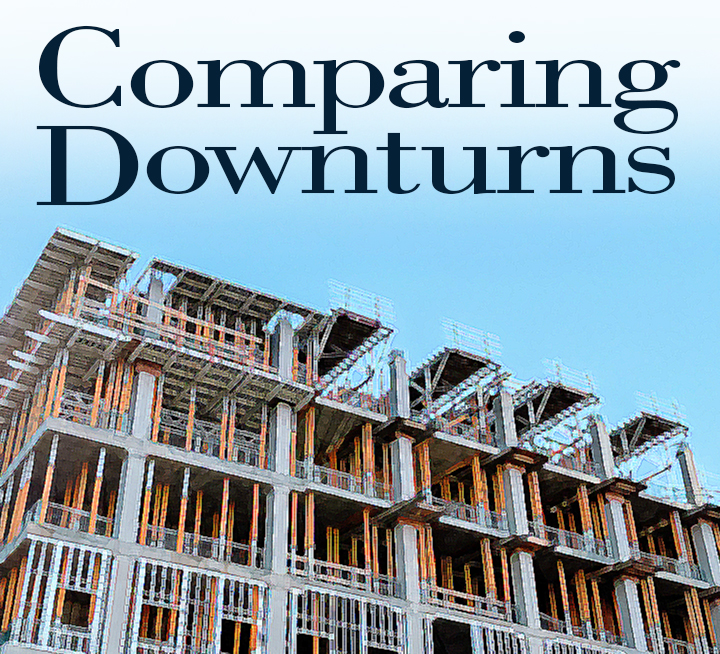 FOR ENGINEERS with several decades of experience, the current economic crisis wrought by the COVID-19 pandemic is, in some ways, a familiar challenge. Experienced engineers who weathered the economic downturns of the early 1990s; the aftermath of the September 11, 2001, terrorist attacks; the Great Recession caused by the financial crisis of 2008; and other national and international crises have learned from the past.

Yet the scope of the current economic damage seems larger and more unpredictable than in previous downturns, says Andy Howard, the Los Angeles-based chair of Arup’s Americas region. In the early 1990s, the business world wasn’t as global as it is today, Howard notes, and during the 2008 financial crisis Arup was heavily invested in markets that weren’t as negatively affected. But today’s crisis is especially challenging because of its impacts on supply chains and credit flows and because of the uncertainty about when current business restrictions may be lifted. In the aviation sector, for example, Howard wonders when air travel will return to its previous levels—or if it ever will. Will some business travel be permanently replaced by videoconferences or other remote meeting approaches currently being used for social distancing? The answers to these questions remain to be seen.

Walter P Moore, headquartered in Houston, has a considerable legacy of coping with bad economic times, having been started by its eponymous founder in 1931 during the height of the Great Depression. The firm’s current chair, Lee W. Slade, P.E., M.ASCE, who is based in Boston, has personally experienced four substantial economic challenges over the past four decades. “We had better be learning lessons as we go!” he notes.

Perhaps the most important distinction—and the greatest lesson learned—between the current crisis and earlier events is exemplified in how Walter P Moore is responding. In both the 2008 recession and an earlier downturn in the 1980s that resulted from falling oil prices in Texas, “we responded with a painful series of reductions in force to reduce costs as the backlog [of work] shrank,” Slade says. But letting employees go turned out to be the wrong approach for Walter P Moore, Slade says. “It damaged the covenant between firm and employee and hindered our readiness to bounce back once the market recovered,” he explains.

So this time, Walter P Moore is acting earlier and more decisively with a different solution, which the firm calls “staying together,” Slade says. “Instead of [reductions in force], we are planning shared cost reductions, including salary reductions” according to salary levels, with the highest earners taking the largest cuts in terms of percentages and reduced bonuses, Slade notes. “Our goals are to continue to serve our clients and be an asset to them through this crisis while keeping our staff intact to the degree possible, share needed sacrifices, remain financially healthy, and be ready for a strong recovery, whenever it eventually comes,” Slade stresses.

One critical difference between previous economic crises and today’s is the pandemic’s threat to overall health, up to and including death, notes Lewis Cornell, P.E., M.ASCE, the Fullerton, California-based president and chief executive officer of WSP USA. The social distancing requirements resulting from that threat may continue to affect the way business is done going forward, especially if certain restrictions remain in place even after the initial lockdowns end, Cornell points out.

In particular, the ability and familiarity that today’s workers have with teleworking technologies is much greater today than 12 years ago—which has “certainly helped our employees adapt to this situation much more seamlessly than it would’ve been in 2008,” Cornell says. “For our engineers, collaborative computer-aided design software programs have become ubiquitous, so in most cases, our need to practice social distancing has not caused major disruptions in design schedules.” Employees continue to “work together while apart and keep their projects on track.”

Congress may soon pass another stimulus spending package—in addition to the Coronavirus Aid, Relief, and Economic Security (CARES) Act—to jump-start the economy. If it does, Cornell hopes lawmakers will expand the measure beyond the so-called shovel-ready projects funded during the Great Recession. He hopes spending will be spread out among projects at different stages—including the planning and engineering phases—to help build “a robust pipeline of projects over time,” Cornell recommends.

Many previous downturns and the current economic crisis share the sense of suddenness, notes Tom Scarangello, P.E., M.ASCE, the executive chairman of New York City-based Thornton Tomasetti. But they differ in how quickly and widely those events affected the economy. The business impacts of the terror attacks of 9/11, for instance, were felt instantaneously in the New York City and Washington, D.C., regions but took longer to spread across the United States, Scarangello says. He recalls that Thornton Tomasetti had clients on projects in other parts of the country who, within a week or so of the attacks, called to say that while they understood how busy and disrupted things were in New York City, they still needed their engineering drawings or other work completed.

In the runup to the 2008 financial crisis, Scarangello says, business was “flying along, we had huge amounts of work.” But ultimately it turned out the economy was overheated, he adds, and when things slowed down the firm used the time to think “about what we could do to put ourselves in a really good position for the future.” Thornton Tomasetti “used that time to build a more resilient business by adding new services and geographic locations,” Scarangello says.

The changes Thornton Tomasetti made after the 2008 recession included a strong emphasis on research and development—and technology, which has made working remotely much easier. “We’ve been wired and connected for collaboration for years now,” Scarangello says.

Experience with previous downturns also helps reassure the leaders and employees of engineering firms that this crisis, like all others, will eventually end. “What is heartening to us at this moment in time is knowing that we’ve come through tough times before,” Scarangello concludes. “And we’ve actually built a stronger, more resilient organization every time because of our experiences during those periods.”

A new industry coalition is promoting greater use of digital technologies that improve the processes of planning, designing, constructing, operating, and maintaining U.S. infrastructure.
Read more
History and Preservation