Imagine. It’s your senior year of high school. You’ve got a spot on the varsity basketball team. A winter awaits, full of buzzer-beaters and hardcourt heroics.

But instead you give it up for … civil engineering?

Tony Kulesa did just that, passing on basketball season during his senior year in favor of a job-shadowing opportunity at a civil engineering firm in nearby Aberdeen, South Dakota.

Surprising as it may have seemed at the time, it’s a decision that continues to pay off for him. He’s a successful structural engineer in Kansas City, serves as a director of technical committees for ASCE’s Kansas City Section and now, ASCE has honored him as a 2020 New Face of Civil Engineering. 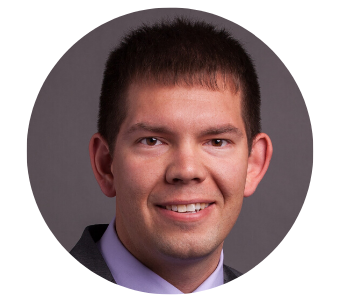 “When you’re in high school, it’s a pretty big decision to make and shift gears like that,” Kulesa said. “I went to a very small school, so nearly everyone played all sports. But I decided it would be a little smarter, more responsible, to try out a job instead.”

Kulesa loved it. The job-shadow class turned into an after-school internship, and before long he had his entire career path in view.

“I kind of wanted to get a better feel for what engineering was. At the time, I definitely wasn’t aware. In my mind engineering was just construction,” Kulesa said.

“What design and analysis was and all the judgments and decisions that happen within engineering – that was completely foreign to me. So that experience gave me a little bit of a peek behind the curtain of what engineering is and drew me in pretty quickly.

“It confirmed my decision about civil engineering before I even started college the next fall. So, it was a great decision.”

He jokes, “I work in oil, gas and chemicals. So it’s not the most glamorous.”

Self-deprecation aside, Kulesa coordinates diverse project teams from around the world on massive projects. Recently, he’s worked on two new crude-oil-refining units and revamped another to be more efficient.

“I get to work with some really complex problems and big infrastructure,” Kulesa said. “New things every single day.”

“When ‘Dream Big’ came around, it almost seemed like cheating, it was such an easy opportunity, such a great tool to reach out to students and people of all ages and backgrounds,” Kulesa said.

“A picture is worth a thousand words, but a movie seemed to be even better than that. So we’ve tried to use it as much as possible. We’ve been lucky enough to have a lot of opportunities for collaboration to get thousands of kids and parents and the community in Kansas City all involved and able to experience it.”

Kulesa helped set up a “Dream Big” launch party in 2017 with the National Society of Black Engineers Convention, hosted in Kansas City that year, screening the film for more than 1,200 students and professionals.

“It was a pretty grand experience for them and really kicked it off right. And from there, we’ve just kept going,” Kulesa said.

“It’s really rewarding for me to see people’s faces after the movie.”

It’s part of his overall lifestyle of volunteerism. In addition to “Dream Big” outreach and local ASCE activities, he’s contributing to three Society-level committees, including the Committee on Student Conferences and Competitions.

Meanwhile – in all the free time they don’t have – Kulesa and his wife are also drop-site coordinators for a diaper bank in Kansas City called Happy Bottoms.

“I don’t really think of it or try to quantify it that much,” said Kulesa of the volunteer time.

“Maybe it’s midwestern hospitality, just trying to do good and give back. But to me, it’s just a lot of fun.

“It’s been so rewarding for me that I’ll continue giving back as much as I can to try to feed the loop.”