This week, ASCE members from around the country took that talk straight to Capitol Hill in Washington as participants in the Society’s annual Legislative Fly-In.

“The timing of the Report Card being at the forefront of everybody’s minds definitely helps get a foot in the door, makes the conversation a little bit easier,” said Brooks Vogel, P.E., M.ASCE, an ASCE Advocacy Captain in Washington, DC, for his fifth Fly-In, representing the Central Ohio Section. “I think this is a universal issue. Everyone knows infrastructure needs help and funding.”

“Our students need a grade of C on average to graduate. But our infrastructure is a D-plus,” said Daba Gedafa, Ph.D., P.E., M.ASCE, an ASCE Advocacy Captain and civil engineering professor at the University of North Dakota College of Engineering and Mines, and a second-time Fly-In attendee. “That means the infrastructure is not ready to graduate from university.”

The Legislative Fly-In gives members an opportunity to engage their representatives and senators in face-to-face meetings. This year, with the Report Card having already sounded the alarm on the infrastructure problem, the Fly-In attendees focused on pitching solutions – specifically, ensuring that the funds approved in recent infrastructure bills, such as the FAST Act and the Water Infrastructure Improvements for the Nation (WIIN) Act, are in fact appropriated to the projects they were intended to help.

“To compete in the 21st century, we need a high-quality infrastructure,” Gedafa said. “We need to advocate for that. I really believe in these issues, and that’s why I’m here.”

The snowstorm that struck the country’s east coast early in the week threw an unseasonably cold wrench in the Fly-In works. Several attendees were forced to cancel, meetings rescheduled, and the Wednesday evening dinner was moved from rooftop to lobby.

“My travel partner had to cancel his flight and hotels because of the snow. I’m the only one from Rhode Island down here,” said Taber Midgley, P.E., M.ASCE, of Providence, RI. “But besides my flight changing a series of times, I made it, so that’s good.”

The event was remarkable for its ability to go ahead mostly as planned. Two hundred ASCE members attended and enjoyed productive meetings with their elected officials.

Ohio delegation after 6 House and 2 Senate meetings on the Hill. #ASCE2DC pic.twitter.com/JbS8qGB2Cy

“She just got into office here replacing Harry Reid, so it was exciting to talk with her and start to have that conversation about infrastructure,” Swallow said. 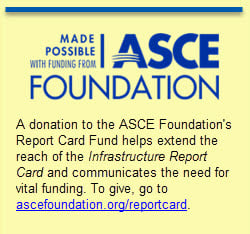 “As we’ve come to the Fly-In year after year, those relationships are starting to further blossom. Staffers know who we are and are starting to really look toward us for information and assistance as they work through legislation.”

While the challenges remain significant, there was a sense of optimism around the group, particularly with the recent passage of the WIIN Act, which contained the Water Resources Development Act – a major point of emphasis during the last few years at the Fly-In.

“I’ve been encouraged,” said Sarah Matin, P.E., M.ASCE, of Winter Garden, FL. “Sometimes it’s difficult to decide where to place money, but I think we’re moving in the right direction.”

José Aguilar, EIT, A.M.ASCE, the Southern Arizona Branch vice president and the student practitioner adviser for the University of Arizona ASCE Student Chapter, attended the Fly-In for the first time. He’s seen the way infrastructure, the street car in particular, has revamped his hometown of Tucson.

“When I was a student I never thought I’d be involved in politics,” Aguilar said. “It’s eye-opening to see that we do have an effect. We do make a difference.”