Being a role model wasn’t really a choice for Aziza Amiri. It was a job she was born into.

“I have so many little cousins, I’ve lost count,” Amiri laughed. “I’m one of almost 20 grandchildren, and I’m the oldest, so I’ve always been around young kids my entire life.”

Amiri isn’t complaining. She loves serving as a role model – for both her family and her hometown of San Jose, CA. 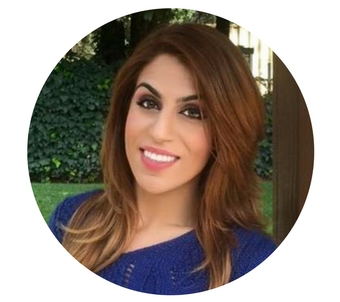 She works as an associate engineer for the City of San Jose, while leading a variety of student outreach programs as president of ASCE’s San Jose Younger Member Forum.

“It’s so important to be a role model to these children,” Amiri said. “The world’s changing, and sometimes kids don’t have the luxury of having their parents at home – they’re busy out making a living, especially in the Bay Area. So taking the time to give back and be that example for them, it’s definitely a rewarding feeling, just knowing that these students will have a future, whether it’s in engineering or something else.”

ASCE has recognized Amiri’s contributions and accomplishments by naming her a 2018 New Face of Civil Engineering.

Amiri is inspiring even when she’s not consciously a role model. In her free time, away from the stresses of managing sanitary sewer and roadway projects, she works as a makeup artist. It’s a fun, artistic outlet for her.

It turned out that one of her clients was a teacher at nearby Rocketship Brilliant Minds Elementary School, specifically geared toward putting children from low-income families, students who are English-language learners, and students with special needs on an early college track. Amiri was the perfect fit to speak with the students about what she does for her career, how she helps engineer the infrastructure of San Jose that they use every day.

But Amiri did more than simply speak to the students. She set them up with a screening of the ASCE-produced IMAX film Dream Big: Engineering Our World. She and the San Jose YMF had been doing a lot of outreach events around the film at the time. So Amiri rallied some of her ASCE friends, as well as some fellow city employees, for the Rocketship screening.

They gave the students an overview of engineering before the screening, watched the film with them, and then answered their questions afterward.

“We called ourselves celebrities,” said Amiri, laughing. “The students and parents were so excited about it. I think I’ve watched the movie like 10 times now, and every single time it was a totally different experience because every time I get to see all the students’ reactions. I could see how intrigued they were, how excited they were about engineering. I think we impacted a lot of students.”

Back when Amiri was a student, she tried biology, business, and journalism, before discovering her love for civil engineering. She tried the statics and dynamics classes at San Jose State University, and not only did she love the subject matter, she found a community.

“I started meeting a lot of people who had the same ambitions as me, same issues with their career path,” Amiri said. “I made a lot of friends through the major, found a lot of similarities with those people. It was like, ‘Maybe I am meant to be in this major.’”

It would certainly seem that way.

Amiri has excelled in her work for San Jose, already managing her own project teams for the Public Works Department early in her career.

“I’m doing a little bit of everything,” Amiri said. “I get to take a project, design it, put it out to bid, hire a contractor, and watch it be built.”

It’s been very satisfying for Amiri, who was initially drawn to civil engineering by the notion of creating tangible, large-scale projects. She managed the construction of the Monterey-Riverside Relief Sanitary Sewer project, which provides excellent drivetime conversation.

“Even though sanitary is underground, to this day, I drive by the area, and if there’s someone with me I’ll say, ‘Hey, there’s a sanitary system underground that I built,’” Amiri said. “Even if they probably think it’s weird, it’s definitely something I feel proud of. Now I’m working on roadway projects. I get to drive by a road that I helped build a streetscape for. So, I’m definitely living that dream right now.”

And in case reshaping the city she grew up in wasn’t reward enough, Amiri has a poster. It’s a gift from the Rocketship students to remind her of her value as a role model.

“All the students signed it, saying thank you for sponsoring us and volunteering and being there to talk to us,” Amiri said. “It just kind of brought a joy to me, that I actually maybe made an impact.

“That just really put the cherry on top. That made me feel like I was doing something important in my life.”

Kacy Grundhauser, A.M.ASCE, talks with Civil Engineering about how she turned a college internship into a full-time job where she can focus on her dual interests in water resources and transportation.
Read more
Society News

Stephen D. Bechtel Jr., Ph.D., Dist.M.ASCE, NAE, retired chairman and CEO of Bechtel, who led the company through massive expansion from the 1960s through the '80s, and was a lifelong philanthropist who championed production of ASCE's 2017 IMAX movie Dream Big: Engineering Our World, has died at 95.
Read more
Career Development