5 Sustainable Projects You Wish Were in Your City 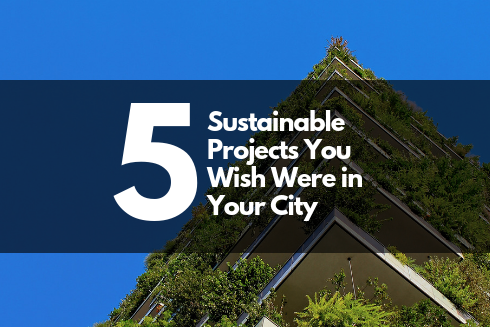 Rapid urbanization is a growing reality in infrastructure development. According to the Global Environment Facility, it’s estimated that more than two billion additional people will be living in cities by 2050. The need for sustainable infrastructure is more critical than ever.

Here are five sustainable Envision projects you wish were in your city:

Who said roadways were just for cars? Why not build roadways accessible to all travelers? The Inner Loop East Transformation project in Rochester, NY, did just that. The underused highway was transformed into a pedestrian paradise, complete with energy-efficient LED street lighting, a protected two-way bicycle lane, ample public seating, safer crosswalks, wider sidewalks, and greenery.

2. The solar project that cuts greenhouse gas emissions in half

Alliant Energy had a bright idea in the Dubuque Solar project. The largest solar garden in Iowa, it supports Alliant’s transition to a cleaner-energy future. Electricity generated from the project will be consumed entirely within the City of Dubuque. Solar panels will also help the city achieve its goals to reduce greenhouse gas emissions by 50 percent from 2003 levels by 2030.

3. The multiuse bridge that connects all types of travelers

The New Champlain Bridge Corridor project, in Montréal, Québec, bridged a gap between the cities of Montréal to the west and Brossard to the east by replacing the existing Champlain Bridge. The major regional transportation system allows all travelers, from pedestrians to cyclists, to access the bridge on a new multiuse path.

Madison Metropolitan Sewerage District’s Pumping Station 15 knows a thing or two about waste. In this case, the station upgraded its 1970s-era pumps and mechanical equipment to reduce energy waste and consumption by 20 percent. The installation of efficient resources, like solar panels, provides the station close to 10 percent of its power needs.

5. The roadway project that sourced over half its materials locally