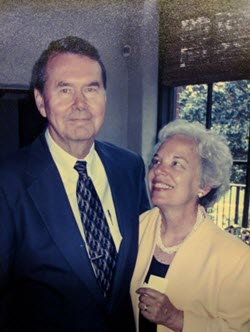 John H. Wiedeman, a leading engineer in Atlanta who served as ASCE president in 1983, has died at 83.

Wiedeman, P.E., F.ASCE, Pres.83.ASCE, was for 15 years an owner of Wiedeman and Singleton Inc., a civil and environmental engineering firm specializing in utility and infrastructure work for municipal clients in the Southeast United States.

Wiedeman served as the Georgia Section president in 1974, before taking on the role of ASCE president in 1983. He participated in Brooklyn Bridge centennial events during his national-level ASCE presidential year. In 1983, both the bridge and ASCE were honored by the Newcomen Society of the United States at its annual dinner-dance in New York City. Wiedeman was the guest of honor and speaker for the evening. That year he also wrote a book, Why We Need Our Brooklyn Bridges.

An Atlanta native, Wiedeman earned his B.S. and M.S. in civil engineering, with a focus on public health, at Georgia Tech in just four years. Following college, he served for two years in the Navy. Wiedeman was involved in approving the 1980 long-range environmental impact plans for the Metropolitan Atlanta Water Resources Management Study.

Devoted to community service, Wiedeman was a member of the Atlanta Rotary starting in 1966. He also served as Pace Academy Parents Club president, a Board member for the Atlanta Athletic Club Board, the grounds chairman for the 1976 U.S. Open and 1981 PGA tournaments, chairman of the Georgia Tech Civil Engineering Advisory Committee, and an active member of Metro Group as well as Reform Atlanta Inc.

John’s son, Hal Wiedeman, followed his father into civil engineering and ASCE, served as the ASCE Georgia Section president in 1999, and now serves as president of Wiedeman and Singleton Inc.

Russel C. "Russ" Jones, a civil engineering academic and past ASCE Board member who became president of the University of Delaware, has died. He was 85.
Read more
Society News

Charles L. Vickers Jr., an accomplished port engineer who designed the first container terminal on the West Coast, has died. He was 93.
Read more
Society News

Maria C. Lehman has been elected as the Society's 2022 president-elect by a majority of Society members voting in the ASCE 2021 election.
Read more
©2023, Civil Engineering Source