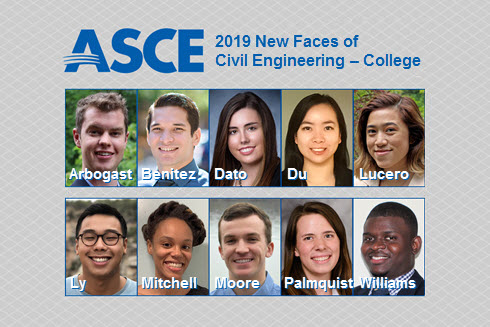 ASCE annually recognizes 10 civil engineering students who represent the future of the profession. They are the collegiate edition of the Society’s New Faces of Civil Engineering.

The 2019 honorees are rising stars, inspired and inspiring, many of them drawn to the profession by a desire to help others and protect the planet.

Although they are young, their project experiences speak to us loudly. One student coordinated a project to install a water pipeline for a school in Rwanda while overseeing the project’s financing. Another is attempting to transform an invasive plant species into biofuel for a Kenyan community suffering from fuel scarcity.

As impressive as these early achievements are, they are surpassed by the students’ commitments to effect positive change.

Like many who’ve entered the profession in recent years, Arbogast was inspired to become an engineer by playing with Legos.

Despite transferring to his university as a sophomore, Arbogast has been elected to numerous leadership roles, many with the school’s ASCE chapter: community service liaison, program coordinator, vice president, and ultimately president. He has also served as director of recruitment, outreach, and university partnerships for Peace through Play, a student-led organization that teaches core values in Boston public schools through games, crafts, and alternative teaching methods.

Arbogast is driven to make an impact. Northeastern offers a co-op program that allows students to work full-time for six-month periods. Working as a project manager at Suffolk Construction satisfied his yearning to make a physical impact on Boston by building schools, hospitals, affordable housing, and luxury high-rises.

Jose Benitez was inspired to pursue his goals by watching his mother and eldest sister pursue theirs. Benitez’ mother grew up in rural Paraguay under dictatorship, his sister in the democratic version of the country but not substantively changed. Although she was a brilliant student, Benitez’ mother was prevented from studying engineering.

“Despite the challenges presented by their demographic, Mom and Laura showed me that passion and perseverance are indispensable for our lives,” Benitez said.

As a transportation engineering intern, Benitez was responsible for traffic and transportation concepts that he believes will be integral to his career.

“Transportation engineering, specifically, is probing the next revolution in that industry,” said Benitez. “Transportation has come to a point in which a more efficient engine will not solve the current transportation problems; we need a new path forward. As an engineering student, I am thrilled to be part of the workforce that has this responsibility on its shoulders.”

Nicole Dato grew up tinkering alongside her father, who was a Port Authority mechanic and the neighborhood handyman. Although her father has passed on, she “continued to build things which makes me feel closer to him.”

Growing up, Dato participated in math and science Olympiads. In college, ASCE introduced her to others with the same type of passions.

Dato is developing a venture in Kenya called GreenBriq. The mission of the company is to transform water hyacinth, an invasive plant species, into a biofuel for local people to cook with. The locals are suffering from fuel scarcity due to deforestation.

“Based off this experience, I want to make sure my future also has a mission of helping others,” Dato said. “Engineering allows me to think outside the box to solve all kinds of problems.”

Christina Du’s grandmother was a structural engineer in the capital city of her province in Asia. It was during high school, while visiting her grandmother, that Du observed the differences between the glass-paneled new development and the old and fading brick tenements.

“Many of the city’s residents – most of them elderly – still climbed multiple flights of stairs daily just to get to their front doors,” Du said. Her heart became set on civil engineering.

Du is one of the youngest undergraduates working at the UC Pavement Research Center in Davis, CA. Researchers, field engineers, and students come from across the state. She’s studying pavement design and engineering at the lab, which designs and tests results.

“Engineering is always on a track of innovation and change, and even as my generation has to face many rising challenges such as sustainability and energy, infrastructure resilience, crisis response, and expanding transportation usage, I know we have the skills and drive to figure out and overcome them,” Du said.

When Sara Lucero was in fifth grade, her class conducted monthly water quality tests on a nearby creek. She enjoyed the fieldwork and data collection so much that she presented the data at the Watershed Congress in Vancouver.

“There, one of the engineers said to me: ‘You have what it takes to be a water engineer someday,’” Lucero said.

Last summer Lucero worked at King County Wastewater Treatment, in Seattle, which infamously flooded and discharged millions of gallons of raw sewage into Puget Sound that same year. She watched firsthand as engineers, mechanics, and operators worked under intense pressure.

“One of the many reasons I chose to be a water engineer is because my grandparents’ home in the Philippines has been flooded countless times by tropical storms, and I knew there had to be a solution to it,” she said. “I want to help build communities that are resilient to disaster, both near and far.”

Lucero was recently hired as a research assistant at a lab in her university’s Civil & Environmental Engineering department that studies infrastructure affected by hurricanes and how digital infrastructure can inform reconstruction of communities.

While volunteering at Engineers Without Borders, Ly was able to see how engineering could remedy these disparities. “[This] broadened my perspective of an engineer’s responsibility to create infrastructure that not only satisfies the minimum design criteria, but seeks to improve its sustainability and promote social equality,” he said.

Last summer, Ly assisted in monitoring the water quality and biological conditions upstream and downstream of the coal-fired and natural gas plants in Pensacola and Panama City, FL. He also led a remote monitoring project of a groundwater treatment plant. As a result, he intends to pursue a master’s program in sustainable systems engineering so he can enter a career that enables him to directly collaborate with communities toward sustainable design, serving the environment and its people.

“As our bridges and dams reach their expected design life, it is our responsibility as engineers to adapt this civil infrastructure to the forces of climate change,” Ly said. “To do this requires an integrated approach involving not only the engineering issue at hand but also the complex socio-economic underlying issues.”

Asia Mitchell was inspired to become an engineer by the success and validation she has experienced at her university.

Mitchell has served as vice president of the ASCE Student Chapter at MSU, captain of the ACI Strongest University Competition, and project manager for an AISC Steel Bridge Team. She’s raised thousands of dollars for these efforts, led professional development workshops, earned top marks, and passed the Fundamentals of Engineering Exam before graduation.

“My Morgan family has helped me realize my strengths and potential and has inspired me to be the best engineer and best person I can be,” she said.
During a summer internship, Mitchell “fell in love” with bridge inspections and bridge design. She describes it as the perfect mix of adventure and engineering challenge. In particular, the scuba portion roused her desire to earn a master’s in marine or coastal engineering.

“I came across something that read, ‘We are the first generation to be aware of our impact on the earth and climate change, and the last generation that can do something about it,’” said Mitchell. “I am an engineer at a time when engineers and scientists are trying to save humanity. I want the world to be habitable and sustainable for my children and generations that follow.”

Trevor Moore witnessed firsthand the environmental disruption and damage caused by raw sewage releases. It happened in a river near his home, caused by failed engineering practices and planning.

His engineering internships awaited him, and each has furthered his passion for civil engineering. Moore said these experiences emphasized to him that engineers working collaboratively can make a difference.

“When engineers are described, many see them as individuals who analyze, design, and fix problems,” said Moore. “To me, engineers can put scientific knowledge into practice; they can utilize and apply knowledge to improve the lives of others.”

Natalie Palmquist was shadowing a civil site designer at an engineering firm in her hometown when she (then a teenager) expressed her interest in working in the developing world. The designer responded that the key difference between developing and developed nations is water, and civil engineers are the lead advisors on water supply and water-use-related infrastructure.

The engineer directed Palmquist to Engineers Without Borders. Four years later, Palmquist was standing in Rwanda shaking the hand of a school headmaster who was thanking her profusely. She had coordinated a project team that successfully installed a water pipeline and tank system, while also overseeing the project financing and stakeholder communication.

“I am passionate about well-planned designs that can bring progress to underserved communities, and I want to participate in the development of infrastructure that will impact the lives of those with the highest need,” said Palmquist.

Last summer, Palmquist traveled to Delhi, India, for an internship with a nonprofit that was working on a hospital design project. The project was the combined effort of licensed engineers, architects, surveyors, and students who were all volunteering their time to produce a professional-grade design.

“EMI taught me the value of a multicultural team with interdisciplinary backgrounds,” said Palmquist. I plan to continue volunteering with EMI throughout my career and hope to eventually work with them full-time.”

Growing up, Henry Williams wanted to be a doctor. In high school, a science class impressed upon him the role that the environment plays in our overall health and longevity.

“This encouraged me to become passionate about protecting the environment,” said Williams. “The idea [is] that engineering is limitless in what can be accomplished to solve a problem.”

During an internship with a department of public works, Williams spent a few weeks tracking the number of people who came to visit the recycling centers, and the volume of their loads. He had the opportunity to observe the amount of solid waste that was recycled compared with what was wasted at the country’s three major landfills.

“At one landfill, I believed there would be a large number of people recycling because of its proximity to the ocean and location on the island, but this was not the case,” he said. This experience turned Williams in the direction of sustainability as well as human risk assessment.

“I get excited about my future as an engineer because that is my opportunity to enrich lives on a large scale by assessing any potential risks that come alongside future innovations,” said Williams.