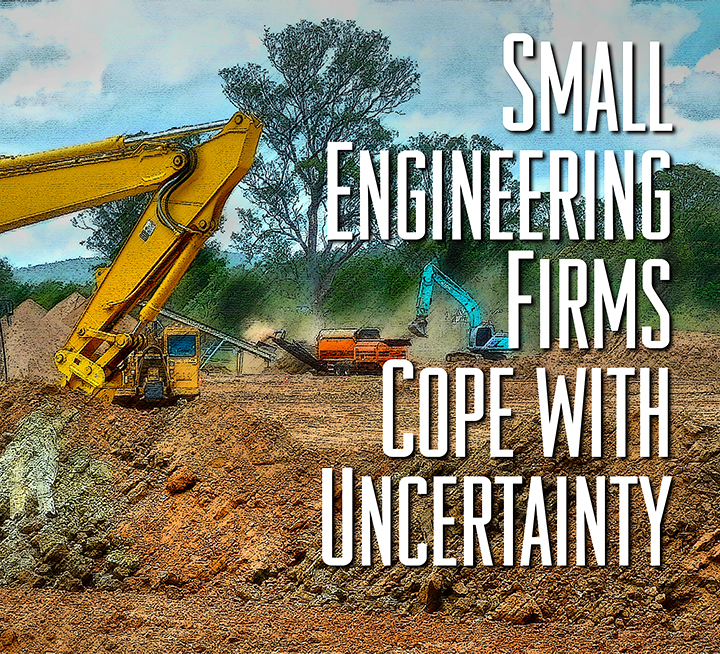 AMID THE continuing COVID-19 crisis, small U.S. civil engineering firms have had to manage a shifting landscape in the quest to remain open for business. At the same time, they also have had to attempt to foresee how the pandemic might affect them in the long run. Civil Engineering interviewed leaders at three small engineering firms to learn how their companies have fared in recent months and what longer-term concerns they have for the future.

Wright Water Engineers (WWE) Inc., which has its headquarters in Denver, is a water resources engineering consulting firm with 47 full- and part-time employees. Since March, when many U.S. states and local governments began issuing stay-at-home orders, WWE has been “impacted in various ways financially,” says Jon Jones, P.E., P.H., D.WRE, M.ASCE, the company’s chief executive officer. “We have had scheduled public- and private-sector projects either canceled or delayed, so this will affect our near-term monthly billings and potentially our long-term revenue.”

The financial solvency of clients also poses a concern. “We are carefully monitoring our accounts receivable to determine whether clients will have difficulty paying for engineering services,” Jones says.

WWE has continued to operate during the COVID-19 pandemic, with most of its staff working from home. However, this transition has not been without its share of expenses. “We have upgraded our technology to enable our staff to work more efficiently from home, and there have been some added costs associated with this,” Jones notes. Meanwhile, WWE has “substantial office space that is largely unused,” he says.

“From the standpoint of our small company,
our biggest corporate concern is the health and
wellbeing of our staff and their families.”
—Ian Paton, P.E., M.ASCE, president and senior
water resources engineer, Wright Water Engineers Inc.

Amid the widespread fear and economic dislocation caused by the pandemic, WWE’s concerns range from the safety and welfare of its employees to the larger ramifications of the ongoing crisis. “From the standpoint of our small company, our biggest corporate concern is the health and well-being of our staff and their families,” says Ian Paton, P.E., M.ASCE, the president and senior water resources engineer for WWE. More broadly, the company worries about the “millions of Americans who are out of work and who are living week to week and with those sectors of our economy that have seen their work basically dry up,” Paton says. “We are also concerned about the uncertainty of our future workload, given the impacts of the pandemic to the broad economy.”

To help mitigate the effects of the economic downturn caused by the pandemic, WWE took advantage of the Paycheck Protection Program (PPP) that Congress created in March as part of the Coronavirus Aid, Relief, and Economic Security (CARES) Act, the $2-trillion economic stimulus legislation that President Donald Trump signed into law on March 27. Overseen by the U.S. Small Business Administration (SBA), the PPP provides 100 percent federally guaranteed loans to employers as incentive to keep employees on their payrolls. To be used for payroll, rent, mortgage interest, or utilities, the loans will be forgiven if employers keep all employees on their payroll for eight weeks. As of May 6, more than 2.4 million loans valued at $183.5 billion had been approved as part of the PPP, according to the SBA.

The CARES Act also provided billions of dollars in federal funding for the transit, passenger rail, and airport sectors, something that Jones hopes will continue. The ongoing crisis “emphasizes the value of expenditures related to infrastructure,” he says, “to keep people working and to create public improvements that will provide long-term benefits for all citizens.”

Culp Engineering LLC is a five-person stormwater engineering services company based in Richmond, Texas. Even before the stay-at-home orders began, most of those who work for the company did so from home. “We’re fundamentally an internet company,” says Dwayne Culp, Ph.D., P.E., P.Eng, M.ASCE, the president of Culp Engineering. “From a logistics standpoint, I was ready for this,” Culp says, though he acknowledges that not having his administrative assistant handy anymore is “a pain.”

At the moment, Culp Engineering remains busy, but potential problems loom on the horizon. “Our workload is about the same as it was before, but getting paid has been a little more difficult,” Culp says. As for its clients, the company has one government agency that represents about 10 percent of its business. The remainder are in the private sector.

“Our workload is about the same as it was
before, but getting paid has been a little more difficult.”
—Dwayne Culp, Ph.D., P.E., P.Eng, M.ASCE,
president, Culp Engineering

The pandemic “probably will impact us over time,” Culp says. “But at this point it hasn’t.” Of much more concern to Culp is the slumping price of oil. As an engineering services firm in the Houston metropolitan area, Culp Engineering works with many contractors that construct buildings for use by oil and gas companies.

Currently, about one-third of the company’s business involves this sort of work, Culp says. “That third is liable to dry up pretty quickly,” he notes. “It hasn’t, but I’m concerned that it might.” Ongoing work is expected to continue as planned, but after that, the future remains murky at best.

“We’re finishing off a lot of things now,” Culp says. “Most of it is not going to get impacted right away. But I think that there’s going to be an impact. I’m trying to budget for a thirty- percent decrease of business this year.”

Against this backdrop, Culp intends to obtain a PPP loan. After filing his paperwork too late to get a loan during the initial round of requests, Culp does not plan to miss his next chance. “I have my paperwork ready for the next round,” he says.

Much like Culp Engineering, Southwest Traffic Engineering LLC, of Phoenix, has not experienced economic hardship so far pertaining to the COVID-19 crisis. Andrew Smigielski, P.E., M.ASCE, the owner of the 11-person traffic engineering firm, attributes this happy state of affairs to “good planning and good clients,” which comprise an equal mix of private and public entities. As an added layer of security, the company also procured a PPP loan.

However, the longer-term outlook is less rosy. “I think public sector work has the potential to go away as tax revenue for cities and local agencies drops,” Smigielski says. “As that tax revenue goes away, public agency projects will take quite a hit. Budgets for agencies will suffer and take time to recover.”

The ability of small engineering firms to recover from the anticipated economic downturn will depend in part on where they are located, Smigielski says. Firms in such states as Arizona, Utah, and Nevada that have lower taxes and fewer regulations will be “well positioned to bounce back,” he maintains.

For Smigielski, another concern has to do with whether the economic hardship likely to come will accelerate the ongoing consolidation within the engineering industry. “It’s becoming a world of big engineering firms and small engineering firms, with nobody in the middle,” he says.