Ask Anthony: How Can I Get My Manager to Take My Ideas Seriously? 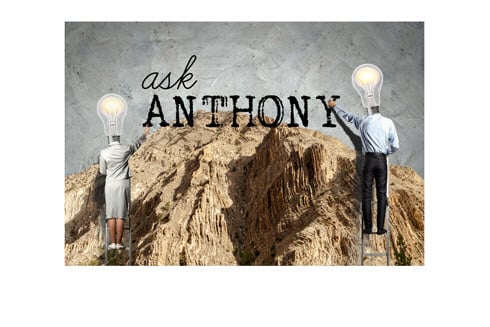 In a recent session of our people skills course for engineers, I received the following question from one of our participants and thought was perfect for this column:

Do you have some advice on how to present ideas as a young engineer to those who are older and more experienced? I sometimes notice ideas get dismissed or given less weight just for the mere fact that they’re brought up by younger engineers.

This is an important question, because less experienced engineers can have ideas that are just as valuable as those of more experienced engineers, but they don’t always have the credibility or confidence to express their ideas. Here are three actions you can take if you find yourself in this situation:

1. Present your idea more as a question than a statement or an answer.

If you pitch your idea in a way where you’re asking your superiors for advice on making your idea the best it can be, rather than, “Do you think this is a good idea?” it may help them to immediately focus on seeing how your idea could succeed rather than trying to poke holes in it.

This may sound like a small difference, but when you ask someone for their help, you are telling them you respect their knowledge and opinion, and they will want to live up to that expectation.

2. Focus more on the benefits the idea will deliver to your team or company and less on the idea itself.

This is the biggest mistake people make in general when pitching ideas, they focus on their idea or the mechanism and less about the benefits it will deliver. For example, if you know of a software that you feel will tremendously increase your team’s productivity and you want to pitch it to your company, pitch them on the benefits.

You might say, “I have researched this new stormwater modeling software that I believe will increase our team’s utilization by 10 percent and which will drive $10,000 more in profit each month.” Whoever you are pitching this to probably isn’t interested in the bells and whistles of the software but will be thrilled to hear about the benefits it will deliver, especially if they are monetary.

3. Consider presenting the idea with a colleague.

Dismissing one person’s idea is much easier than dismissing an idea that has multiple people behind it. Consider drumming up interest from other coworkers or colleagues before pitching your idea to the decision-makers. There are many benefits to this approach, including increased confidence and the value of others’ perspectives helping you to shape your idea.

Please, whatever you do, don’t neglect to pitch an idea because of fear or lack of confidence. It may just be a game changer for you and your company.

An idea is salvation by imagination. – Frank Lloyd Wright

Anthony Fasano, P.E., M.ASCE, is the founder of the Engineering Management Institute (previously known as the Engineering Career Coach), which has helped thousands of engineers develop their business and leadership skills. He hosts the Civil Engineering Podcast and he is the author of a bestselling book for engineers, Engineer Your Own Success. You can download a free video series on his website that will give you the tools needed to immediately improve your networking and communication skills by clicking here.